Throughout the course of the 2017-18 college basketball season, I’ve been somewhat obsessed with assist networks, diagrams and distributions of the way players on a given team assist each other’s field goals. With conference play in full swing and the season reaching it’s halfway point, I decided to examine various centrality metrics for each NCAA player in hopes of creating some “All-American” teams.

Now, the teams with the lowest clustering coefficients. 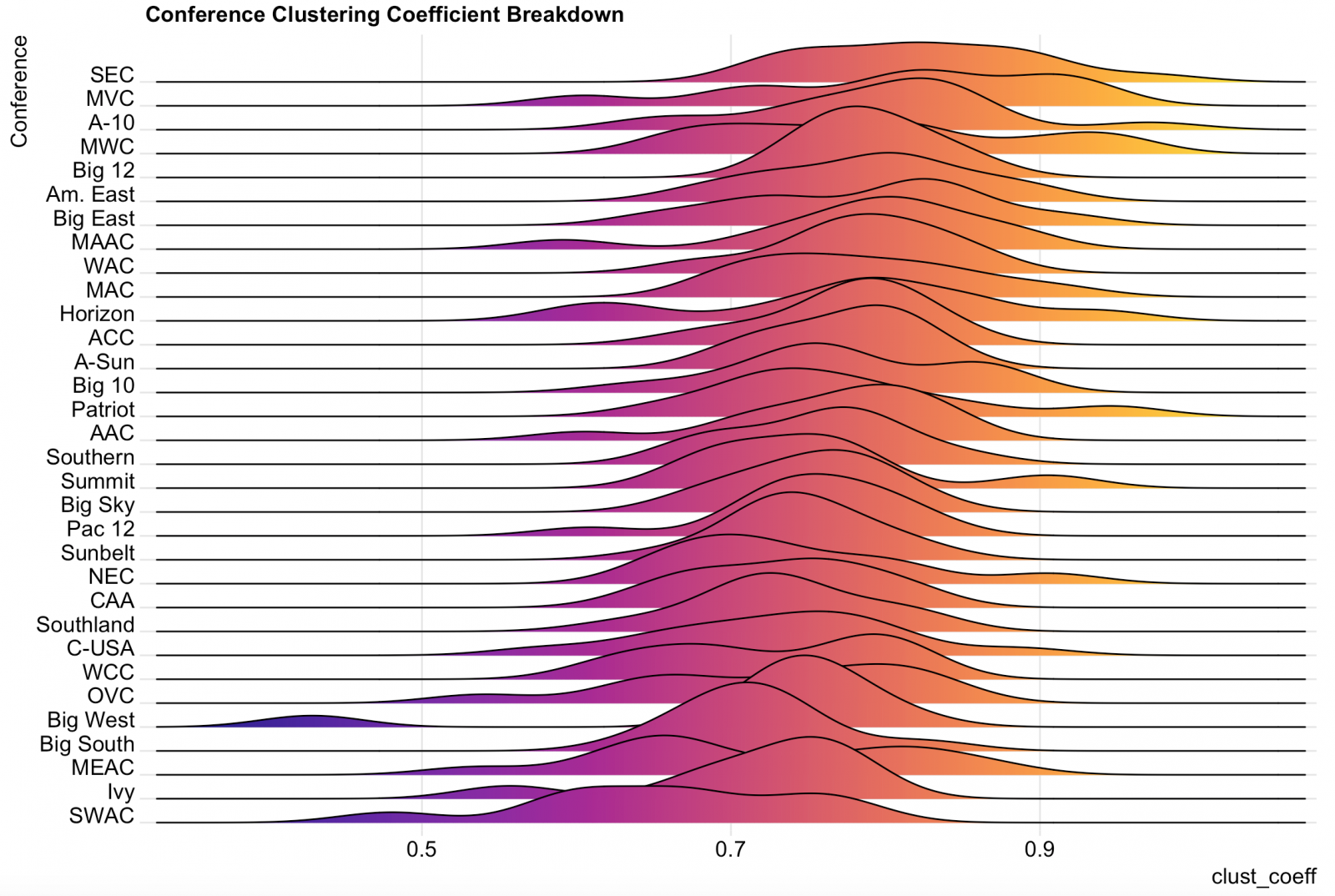 Now, I move onto the individual awards. I will use the following 5 metrics to create “All-American Assist Teams”, though they need not be traditional 2 Forward, 3 Guard teams. Rather I will simply take the top 5 players in each category.

For the most part, the weighted and unweighted teams look remarkably similar outside of shuffling the order of some players. The key exception to this is the “Authority Score” team, which is entirely different when 1.5 weight is given to 3-point assists. What’s interesting to note is that many of these players, with the exception of Trae Young and Emmet Naar, are not known on the national stage, yet they are among the most valuable to their teams in the entire country. This isn’t necessarily a reflection of their talent, but rather their talent relative to the teammates. Thus, the recurrence of representatives of teams like Delaware State, Howard, Murray State, UC Riverside, and UC Santa Barbara indicates a clear talent imbalance among the core members of these teams. Perhaps most remarkable is the fact that even surrounded by good players at Oklahoma, Trae Young is on the same level relative to his teammates as the best players on some of the worst teams are to theirs. Finally, it’s worth giving a particular shout-out to Howard’s RJ Cole. Cole is responsible for (assists or makes) 92.3% of the Bison’s points off assist, making him perhaps the most valuable player in the entire nation! If you’d like to play with these assist networks, be sure to check out my app. You can also see team leaders in each of the above metrics in the attached spreadsheet.

Author’s note: Data constitutes all games played though 1/2/2018, with the exception being games that don’t have play-by-play logs available on ESPN.