With all the hype, coverage, and yes–madeness surrouding the NCAA tournament, it’s easy to forget that NIT is also going on, and features some decent basketball teams as well. Last year’s champion NIT champion TCU had a very strong follow-up season, finishing in the KenPom top 25 and earning a 6 seed in this year’s NCAA tournament. A lot of people claim to have seen this TCU rise coming, and even ranked as a top 5 team in ESPN’s preseason BPI. I was curious how often teams went on a deep NIT tournament run and then followed it up with a succesful season like TCU, and if success in the NIT was predictive of an NCAA tournament appearance in the next year.

I began by compiling a list of NIT champions and runner’s up from the KenPom era (since 2002). Next I compared the adjusted efficiancy margins (adjEM) of each set of NIT finalists to their adjEM’s the following year. 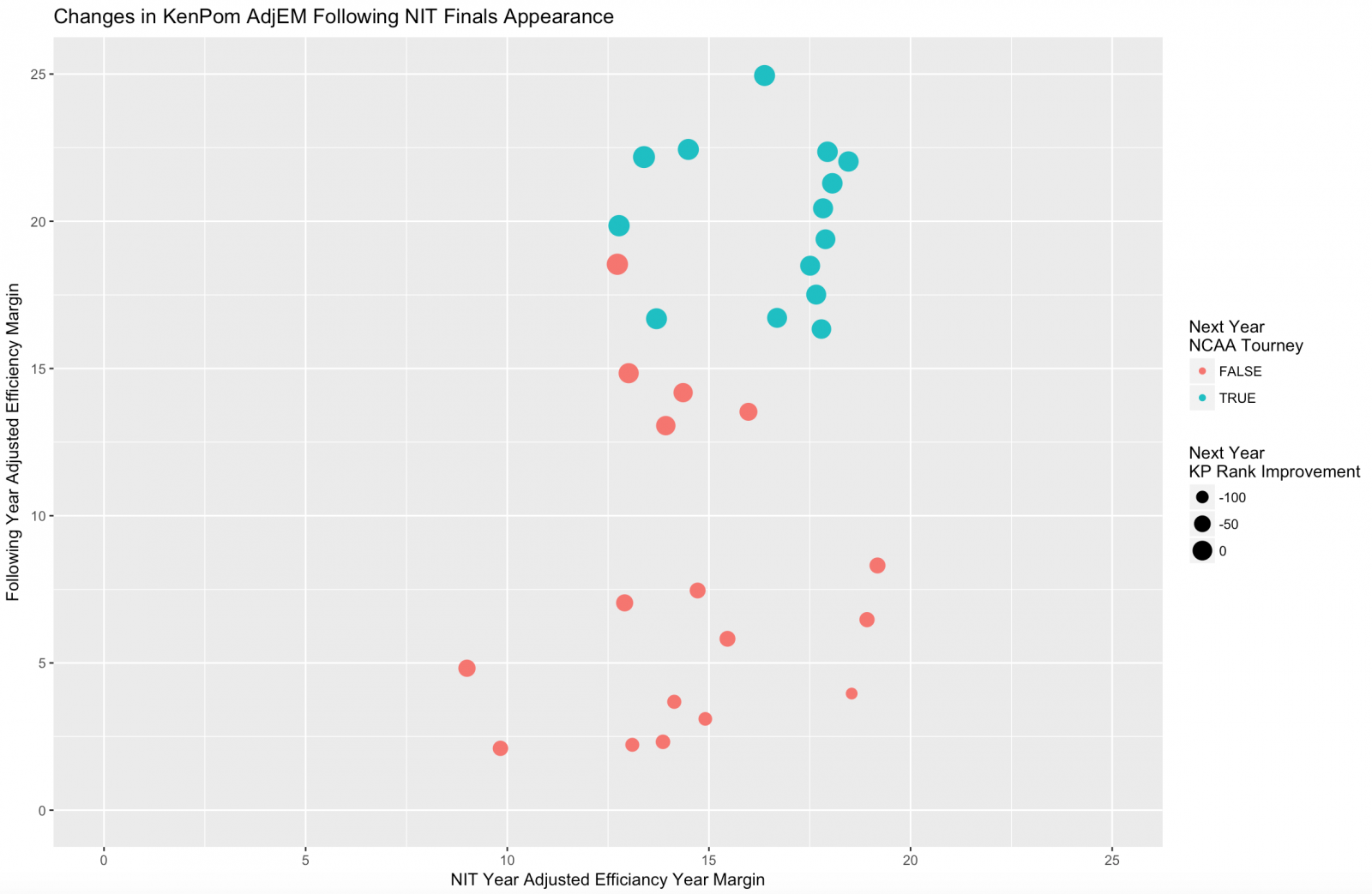 Of the 32 NIT finalists in the past 16 years, 14 (43.8%) have gone on to to improve their adjEM the following season. Yet, of those 14 teams to see adjEM improvement, 12 (85.7%) went on to make the NCAA tournament following their deep NIT run. Furthermore, only one team (South Carolina 2006) that achieved and adjusted efficiancy margin of 15 or better the year following its NIT run failed to make the NCAA Tournament. This is somewhat surprising given the fact there 14 teams with adjEM of 15 or better reached the NIT finals (and thus didn’t play in the NCAA tournament). Of the 14 teams who made the NCAA tournament following a trip to Madison Square Garden for the NIT title, only 2 (Memphis 2003, Wichita St. 2012) would be considered mid-majors.

On a large scale, the NIT doesn’t seem to predict future success. However, when looking at high major teams that were borderline tournament teams to begin with, there does seem to be some value in a deep NIT run. Given that the 2018 semi-finalists are Penn St., Mississippi St., Utah, and Western Ky., there is guarenteed to be at least one such high major in the finals, and it wouldn’t surprise me to see any of those teams (except Western Ky.) be in serious contention for an At Large bid.

Examining the NIT is somewhat problematic to begin with, as the best teams (who just missed out on the NCAA tournament) often don’t play to their full potential. Thus, there is an inherent visibility bias in that several (if not most) of the best teams to make the NIT don’t reach the finals, and thus aren’t examined by this study even though they are perhaps the most likely to reach the NCAA tournament the following year. That being said, there still seems to be some value exploring deep NIT runs, you just have to look at it the right way.