One of the goals for any team evaluating talent is the ability to easily compare players, perhaps even with a single statistic. Baseball sabermetricians have come up with a stat called wins over replacement that basically signifies how many more games a team would win with a player versus the available replacement. My goal is to come up with a couple key statistics that can be used to compare players in soccer.

The first problem with evaluating talent in soccer is that there are different positions that contribute different parts to a winning team. In baseball, a huge portion of a player’s contribution comes from their batting. Because of this position players, even a catcher and a right fielder, can be compared much more easily than a center back and a right winger. To combat this, I’ve come up with four different skills that can be evaluated independently. These are goalkeeping, defending, creating, and scoring. For the purposes of this data, I’ve been examining data from the first half of this English Premier League season. The first article in this series examines goalkeeping 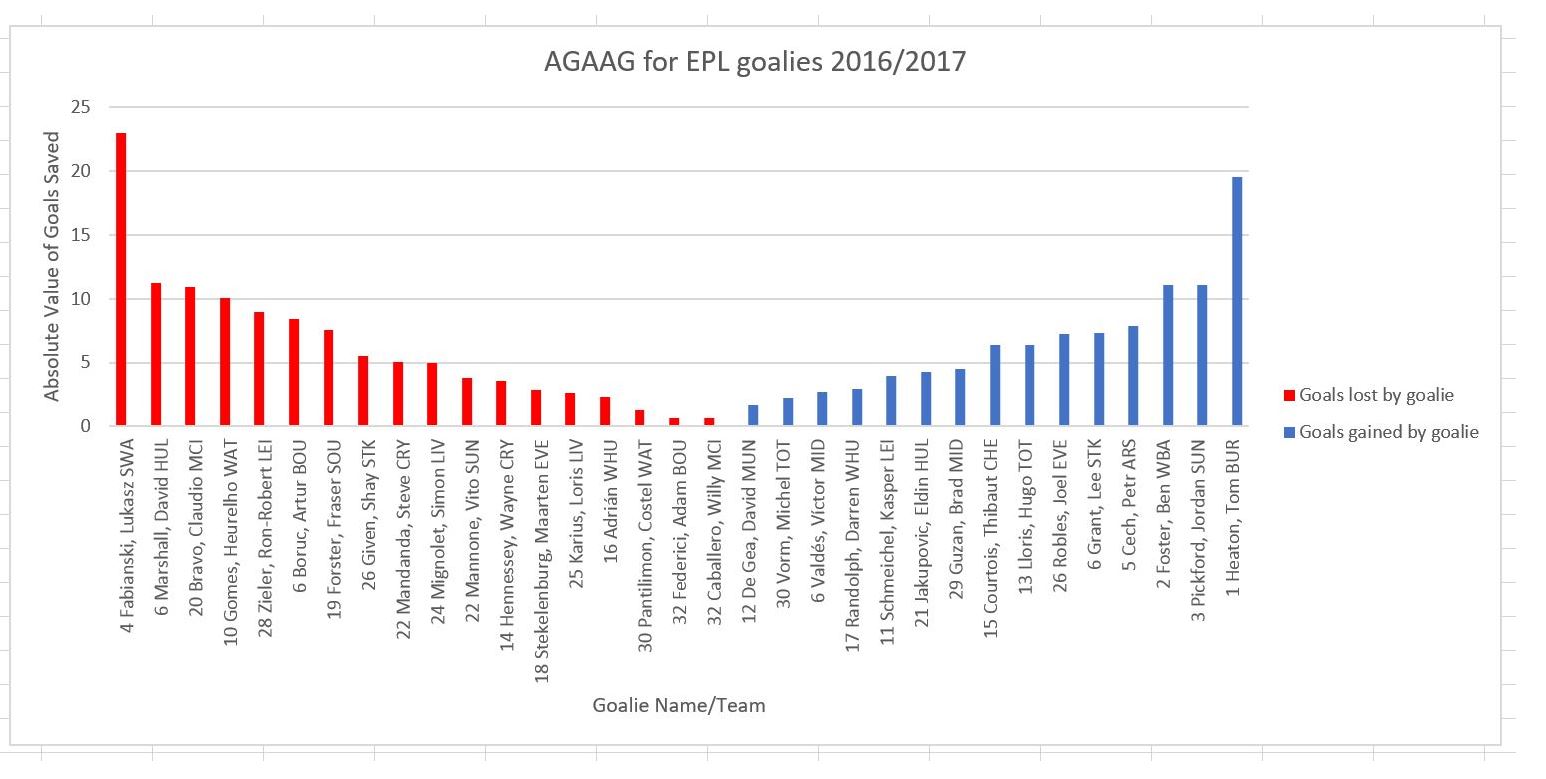 This chart shows the adjusted goals above average goalie for every premier league goaltender, through match day 22. Because of the match day coefficient, the magnitudes of AGAAG should stay about the same if this data is updated throughout the season. Going forward, I would like to create statistics such as the AGAAG that can show a defender or scorer rating.

The advantage of GAAG over simply comparing save percentage is that it is weighted to the amount of action a goalie faces. A goalie who has been consistently good for many games, such as Tom Heaton, who has started every game for Burnley this year, has a higher GAAG than Joel Robles of Everton, who has a higher save percentage even though he has only played in a third of his team’s games. On the other end of the spectrum is Lukasz Fabianski of Swansea City, who has started every game for his team this year, yet carries the second worst save percentage in the league. GAAG brings out this consistent struggle, shown in a negative GAAG value twice as high as the next closest player. The setback of this statistic is that it can only show a page of a larger season. If we were to compare GAAG at the end of the season, it would look quite different. To combat this, we can create an adjusted value called AGAAG (adjusted goals above average goalie). This can be done by multiplying GAAG by the match day coefficient: 38/n, where n is the match day that has been played through. This allows GAAG to scale for the length of the season, while preserving the fraction of games that the goalie being observed has played in.