The NBA draft lottery makes the NBA draft perhaps the most interesting in all of sports. The fact that any non-playoff team could end up with the number one pick and a chance to snag that once in a generation player provides incredible excitement. That being said, more than any other major North American sports league, the talent in the draft drops off considerably after the first few picks. My goal in this project is to come up with a quantitative methodology for comparing the value of different slots in the draft, both before and after the lottery. For example, the first overall pick should be worth more than the first seed in the lottery because the expected pick corresponding to the first seed is 2.64. By examining the rate at which available star talent happens, we can make recommendations about how trades should occur, and perhaps what value they should hold.

I started out by simply collecting data on each of the first 14 draft picks. For every Rookie of the Year since 1952, I awarded one point to their numerical draft pick. I awarded two points for an MVP (with data since 1955), three points for a finals MVP (with data since 1968), and 1/6 of a point for a simple all-star appearance (data taken among all active players) because there are of course 24 players taken per year. Summing the resulting values for each pick presented a sort of star player index, giving much more weight to players like Lebron James and other all-star game regulars who have perennially appeared near the top of the voting for the league MVP, much more valuable than a player who makes an all-star game during an irregular stand out season for them. I scaled all the values so the first pick is worth $100, then plotted all the data, seen in the red points on the graph below. 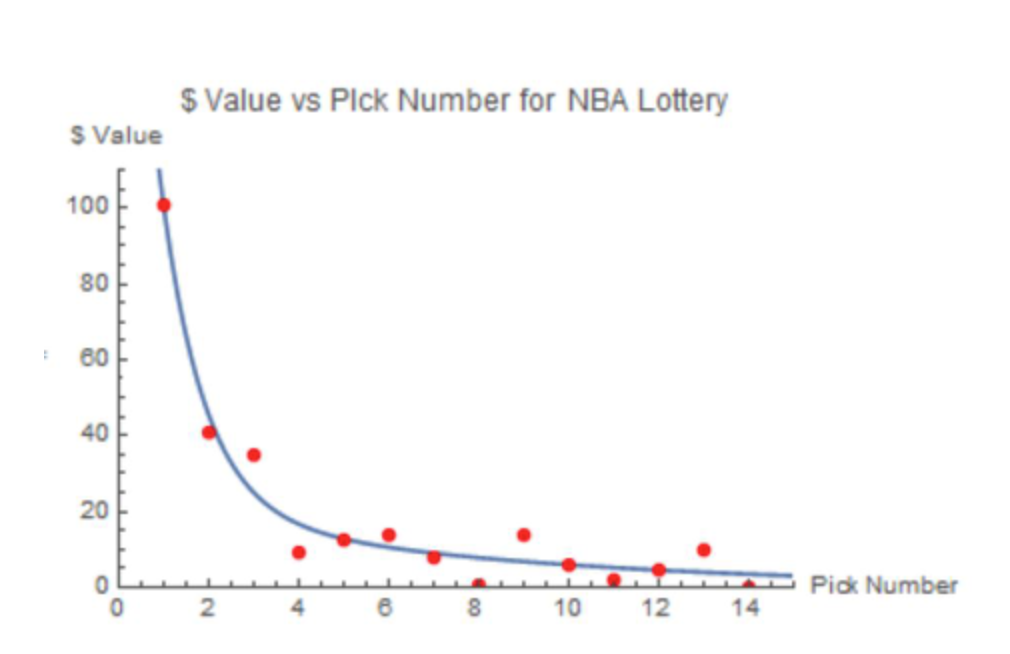 I then used a double exponential curve to fit the data, and found the equation to be as follows, where x is the pick number:

The multiplication done outside the curve is used for the 1st pick worth $100 scale that makes it easier to compare values. Multiplying an exponential curve by a constant does not distort the ratio between f[a] and f[b], so it is safe to do this without compromising the data. We have plotted the curve, as well as the raw data, on the graph below.

It’s easy to see that the chances of getting a star player decline greatly after the first three picks. This is of course the reason the NBA chooses to assign these picks by lottery, in order to discourage teams from tanking to receive these picks. In the NFL, the rate at which available talent disappears is much lower, so there is not really an incentive to lose more games to secure the first or second vs fourth or pick. This doesn’t of course prevent teams from overestimating the value of higher picks, as we saw a couple of weeks ago when the Chicago Bears traded four picks to move up from the third to the second pick.

The teams holding the first three seeds have expected picks lower than their seed while the rest of the teams have expected picks higher up in the draft than their seed. For example, the team with the 8th pick has the greatest chances of picking around 8, but the small chance that they could get a top 3 pick drives down the expected pick number, and makes it so the 8th seed is worth more than the 8th pick. If we apply the equation from above to the these predicted values, another table can be constructed that compares the value of each pick with the expected value to be received by the team holding the corresponding seed.

On the table, it is important to note that the expected value of each seed declines much slower than the value of each pick. The first pick has about four times as great a chance of getting a star player than the third pick, while the first seed in the lottery has only about 4/3 times the chances of getting that star as the third seed. This shows the true power of the lottery in equalizing the chances of each team. It slows down the decline in the value of each seed. When comparing picks to analyze trades, the column on the far right of the table above is what teams ought to look at. If we graph this data, we see an almost linear decline for at least the top 10 picks. 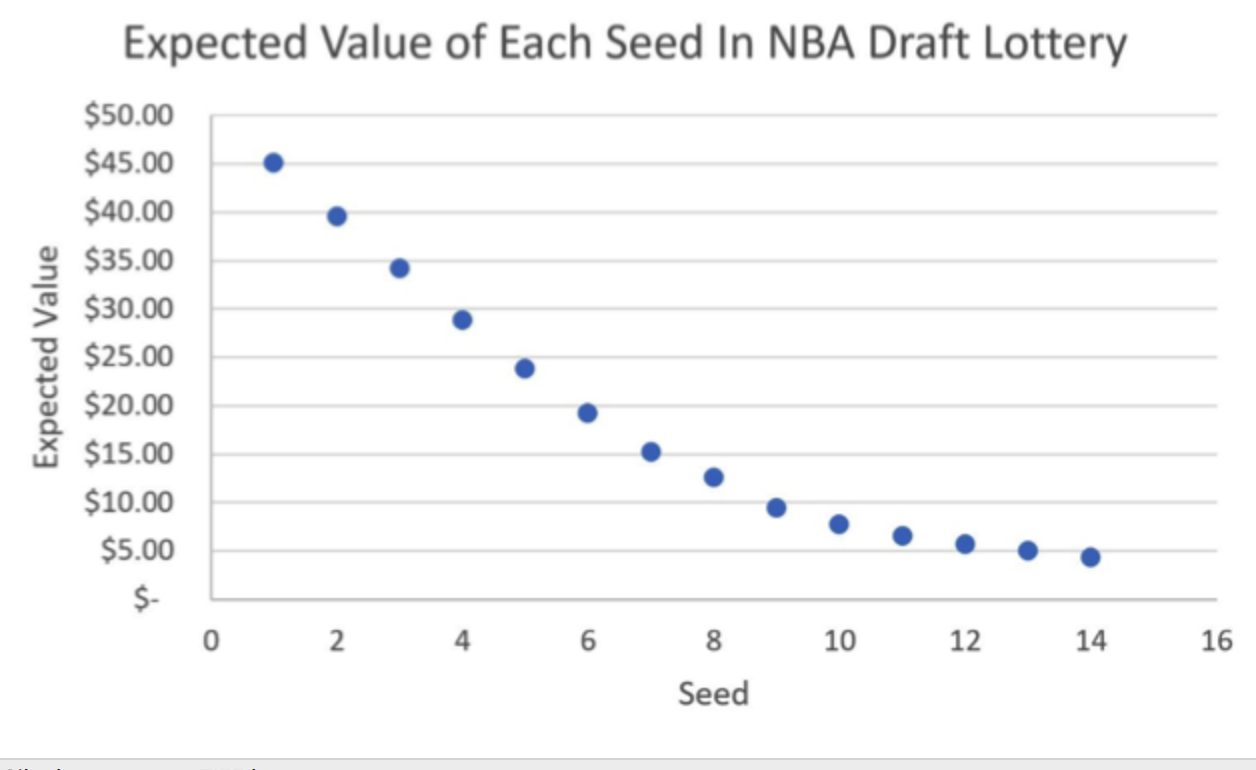 What this graph tells us is that teams should be very careful overpaying for a draft pick before the lottery. The first seed is very much not the first pick, and should be analyzed accordingly. In my economics class this past semester, we learned about loss aversion in relation to insurance. The reason people buy insurance is because their expected happiness is almost always less than the happiness of their expected situation, due to decreasing marginal utility. People are then willing to buy insurance that guarantees their expected situation because this raises their expected happiness. The NBA draft lottery does not follow this same principle, however. The expected value of each seed is greater than the value of the expected pick for every single seed, shown in the table below.

Because this is the reverse trend observed in income and happiness, no team would be willing to buy “NBA draft insurance,” let’s say a monetary value guaranteeing the expected pick’s value that would result in a payout should they drop down in the draft. This isn’t really feasible for a number of reasons, but let’s look at the far right column, TC or trade coefficient, the ratio of the expected value of each seed to the value of expected pick for that seed. Let’s say trading the lottery spot results in a payout of the expected pick, while keeping it results in rolling the dice. The expected value of each seed is then the value that could be obtained trading the pick after the lottery, once the pick number has been determined. If TC 1 for all seeds, it is not worth it to trade a pick before the lottery.

The incredibly important factor we have yet to account for, however, is the strength of a draft. Without any scouting knowledge at all, it is not worth it to trade a lottery spot for its market value. If the right trade comes along, it is of course acceptable. The reason it is not worth it is because the 2nd derivative of the curve that determines talent decline is always positive for an average draft. But let’s say we have a particularly strong draft, with multiple players that are being heralded as can’t miss prospects. The 2003 draft was a good example, with Lebron James, Dwayne Wade, Carmelo Anthony, and Chris Bosh making up four of the first five picks. The rate at which available talent declined would have had a negative 2nd derivative, just like a happiness vs income graph in economics. In this case, TC would have been less than 1 for the first few picks, meaning that trading one of the top seeds would have a good idea if market value could have been obtained. Of course, no one would have offered market value for a top seed in that draft, because no team would be willing to pay what they should have in order to get a shoot at one of that draft’s top prospects.

Alas, it certainly appears that this year’s draft is not the 2003 draft, and exhibits average trends of player talent. Making any last-minute trades before the lottery tonight probably is not a great idea. A team like the Celtics, that should probably move their pick before the draft, is probably better off waiting until tomorrow morning to do so. The NBA draft lottery is an exciting night for the league, with good reason. Every fan of a bad team should be excited about the prospect of getting that difference maker. Only time will tell which team might look on tonight as a turning point for their franchise.