What Can a Lottery Pick do for You, Who Won the Celtics-Sixers Trade, and Which Teams Can’t Seem to Get out of the Lottery?

Draft week is upon us in the NBA. On Thursday night, 60 young men will embark on the next step to becoming professional basketball players. After working their entire lives towards this moment, the lucky few who have risen above the pack will hear their names called out, hug their crying mothers, and get the chance to walk across that big bright stage kids across the country dream about. On draft night, we focus on the players, and rightfully so. Basketball is a sport where more than in baseball, football, hockey, or soccer, one star player can make a team of role players into contenders overnight. Bad teams and their loyal fan bases believe that the draft is their night to turn things around, to find the missing piece that will save their franchise. The question then becomes, how realistic are these dreams?\

To address the idea of whether a rookie can save a team overnight, I’ve decided to analyze the short-term impact of each player drafted in the top 14 for the last ten years. I thought the best way to analyze the immediate value taken from a draft pick would be to see the difference in wins from one year to the next. There are of course a couple problems with this simplistic system. First and foremost, bad teams generally have cap space and can afford to bring in good veteran talent, a positive externality that overvalues the impact of holding a high draft pick. An example of this would be when the 2007 Celtics traded for Kevin Garnett and won 42 more games the next season. Additionally, draft day trades for future picks are effectively meaningless in impacting the upcoming season since it often results in the same team being assembled from one year to the next. That being said, after looking at the average wins added by holding a draft pick over the last ten years, there is an observable trend where the worst teams win more games the next year than bad/mediocre teams. 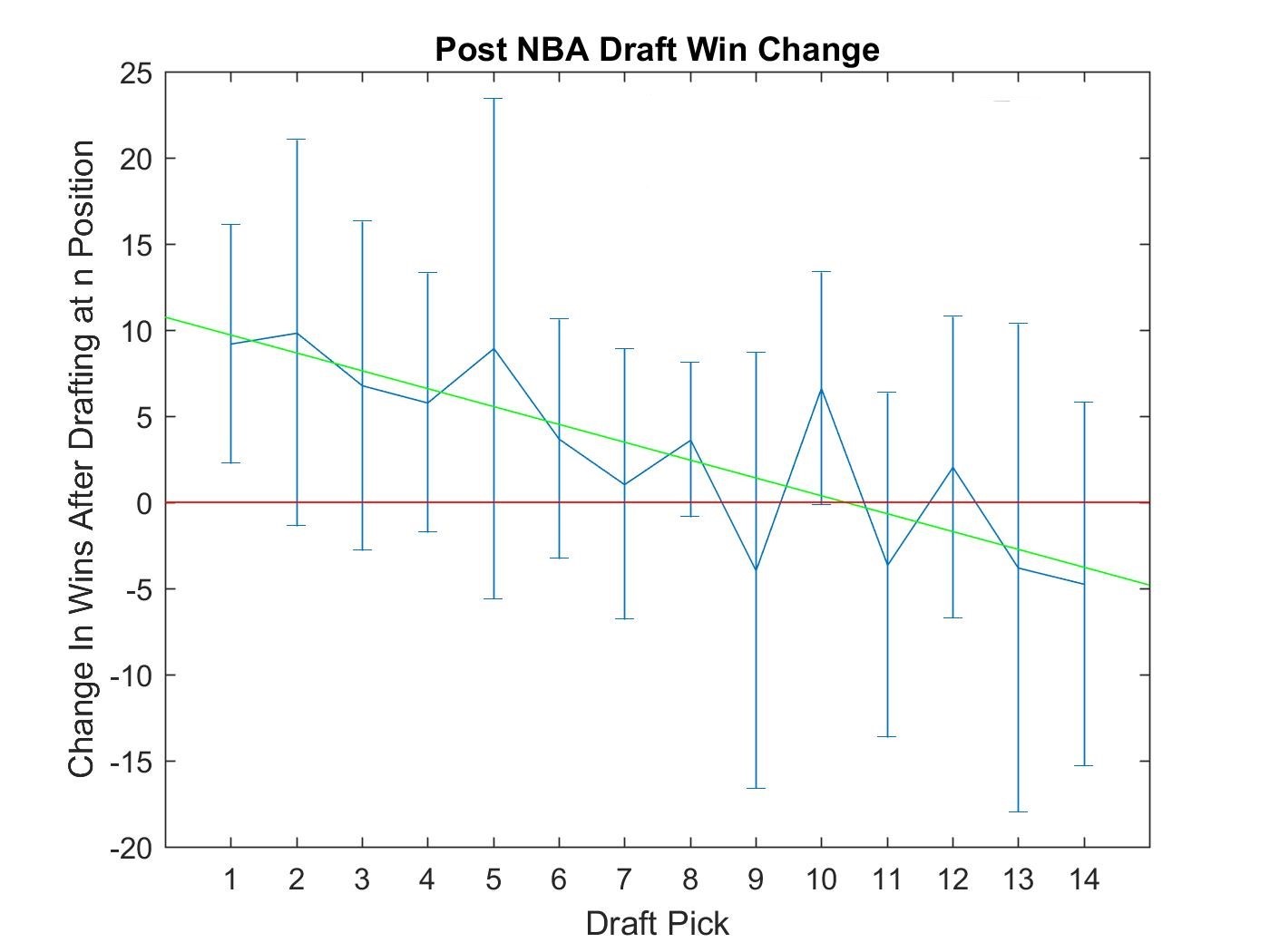 The uncertainty bars shown are the standard deviation for the mean win change since the 2007 NBA draft.

Regardless of how good a rookie is, it’s usually hard to be much worse than a team would have to be to get the #1 pick two years in a row. With a young a budding talent joining the roster the following year, it’s easy to see how teams are averaging 10 more wins the following season. On the other end of the spectrum, teams that barely miss the playoffs are usually still a few pieces away from becoming true contenders. Outside the top 10, the chances that a team will pick up a player with immediate impact potential is quite low. Even the sleepers who have been drafted in this range usually take a couple of years to develop. Scouts are good at evaluating talent. They don’t usually miss players who can transform a team from the get go, and if your team is drafting outside of the top 10, you’re probably out of luck. These teams can also include solid role players who leave for a chance to play on a good team elsewhere, another potential explanation why these teams are losing more games the following year. No one wants to be in contention for the 8th playoff spot. In fact, here’s my hot take of the day. As a fan, I would rather have a top three pick and suffer through an awful season than battle for the 8 seed to get beaten in the first round. That of course, is why tanking exists and is so prevalent. If we looked five years down the line and looked at the number of high draft picks taken, I would guess the graph would look quite a bit flatter, as rookie sensations burn out and solid contributors are developed. As for immediate impact, however, the data suggests that the following year, a good way to think of it would be that on average, a team can expect to win 10 – ‘n’ more games the next year, where n is the lottery pick that they hold. This suggests that teams drafting in the mid-teens are out of luck for draft day salvation. The worst may be yet to come for those franchises.

A lot of talk this year has revolved around the Celtics getting the top pick in the lottery, as their 53 wins are the most ever by a team to be drafting 1st overall. Much speculation surrounded the prospect of shipping this pick off to Indiana or Chicago for a Paul George or Jimmy Butler that would give their team the sg/sf they need to compete with the Cavaliers. In the end, their final decision was not to go after a proven talent, but was to trade down in exchange for a pick next year. So, the question becomes, as it always does, who won the trade? For those of you who aren’t aware, the trade was as follows. The 76ers receive the Celtics’ 1st overall pick in this year’s draft. The Celtics receive the 3rd overall pick in 2017, and Lakers pick for the 2018 draft, as long as the pick falls within 2-5. If the pick is outside the range, the Celtics will get the Kings 2019 pick. The 76ers come out winners because they get a number one pick, plain and simple. #1 picks are super valuable in the NBA. They’ll get their athletic point guard to run their offense. More importantly, they still have their 2018 1st round pick, potentially two if the Lakers get the #1 pick next year. As for the Celtics, using my rankings from last month’s piece on the NBA lottery , I’ve compiled the following evaluations for the Celtics trade yield:

As we can see, based upon where the Lakers draft, the value that the Celtics have gotten out of this trade has the potential to vary greatly. If the 76ers hadn’t protected the potential #1 pick, the Celtics would have had the potential to absolutely demolish the 76ers in this trade, as the Lakers are most likely not going to be too much better next year. (Sorry Lavar). While my values make it look it look bad for Boston, it’s important to remember that these values take into account a draft in a vacuum, where there is no consideration as to how evenly dispersed talent in a draft is. The valuation my model gives the #1 pick is skewed by people like Tim Duncan and LeBron James who were known to be the next big thing the moment they declared for the draft. I think this draft class looks average to slightly above average, but the key is the dispersion. I don’t see the talent level degrading outside the top 3 or even from 1 to everyone else as is usual. This 1st overall pick is certainly not worth more than the 2nd and 3rd pick. My model rates the chances to get a superstar, not necessarily to get a player who can contribute, especially for a team that isn’t looking for a franchise player, but rather a final piece to the puzzle. The Celtics can get that at number three. This combined with a top 5 pick next year, and I think it’s safe to say Celtics fan should sleep easy, especially with a big free agent potentially heading to Boston this summer. A win-win trade is hard to negotiate, but this is about as close as I’ve seen in a long time for a transaction intended to move up in the draft.

The long-term hope of everyone drafting in the lottery is to minimize time spent in that position. Unfortunately, some teams just can’t seem to get away. The Kings for example, have averaged 1.1 lottery picks per year over the last ten years, compared with the Spurs who have never faced that position.

Now, some teams, such as the Celtics, reap the awards of won trades by stealing picks from the awful Nets, who haven’t had a lottery pick since 2010, despite being pretty bad since then. In general, though, this plot tells us which teams have been consistently good, and which consistently mediocre. The Kings have never had a top 3 pick, meaning they’ve never had a really good shot at a difference maker. Their perpetual mediocracy, where they rank among the bad but not the worst, results in roughly the same position every year, not helped at all of course by having to play in the hyper competitive Western Conference. These are the type of teams that miss the playoffs every year. The system is designed to help the very worst teams by giving them the best talent. Because of the way the talent degrades, however, lower middle tier teams seem to be out of luck, confirming the trend we see when looking at immediate win gain.

We’ll see what happens Thursday night. Perhaps we’ll even see another last-minute top trade as we saw in the NFL this year. There’s nothing quite like draft night, as the ticking clock means anything can happen. Only one thing is guaranteed, the lives of the young men selected are about to change forever. Best of luck to all parties involved.