One of the things I love most about college basketball is the sheer number of games played each season. With 351 Division teams each playing around 30 regular season games, one has no trouble finding games to watch when basketball season is in full swing. Like most fanatics of NCAA hoops, however, I only have limited time each week to watch games. With so many games to choose from , it can sometimes be difficult to find the best games to watch. With this "problem" in mind, I set out to create a new metric, entitled "Game Excitement Index" (GEI) in order to predict which games will be most entertaining for viewers.

The first step in calculating GEI is to adjust a team's YUSAG Coefficient to ensure that all coefficients are positive (since I want the minimum GEI to be 0). To do this, I simply set the adjusted team strength of the worst team in our power rankings to 1. Then, that same shift is added to every other team's YUSAG Coefficient to ensure that the relative differences between two teams' strengths remain the same.

Once the YUSAG Coefficients for each team have been shifted accordingly, I take the harmonic mean of the adjusted strengths of the two teams for the game in question. I use the harmonic mean as opposed to the more traditional arithmetic mean to ensure that both teams are good for a game to get a high GEI rating. A game between defending national champion North Carolina and A&M Corpus Christi would give the same arithmetic mean of adjusted team strength as a rivalry game between Providence and Georgetown, but the harmonic mean for the latter game would be much higher (and any fan would agree the former Big East showdown is the more intriguing of the two). In addition to the harmonic mean of adjusted team strength, I factor in the difference between the adjusted team strength for the two teams in question. Specifically, the closer the two team strengths are, the more exciting one would expect the game to be. This fleshes out games between evenly matched mid-major schools instead of selecting mediocre games in power conferences in ranking which games are more exciting.

The distribution of Game Excitement Index ratings from the 2016-17 season seems to be Chi-Square. 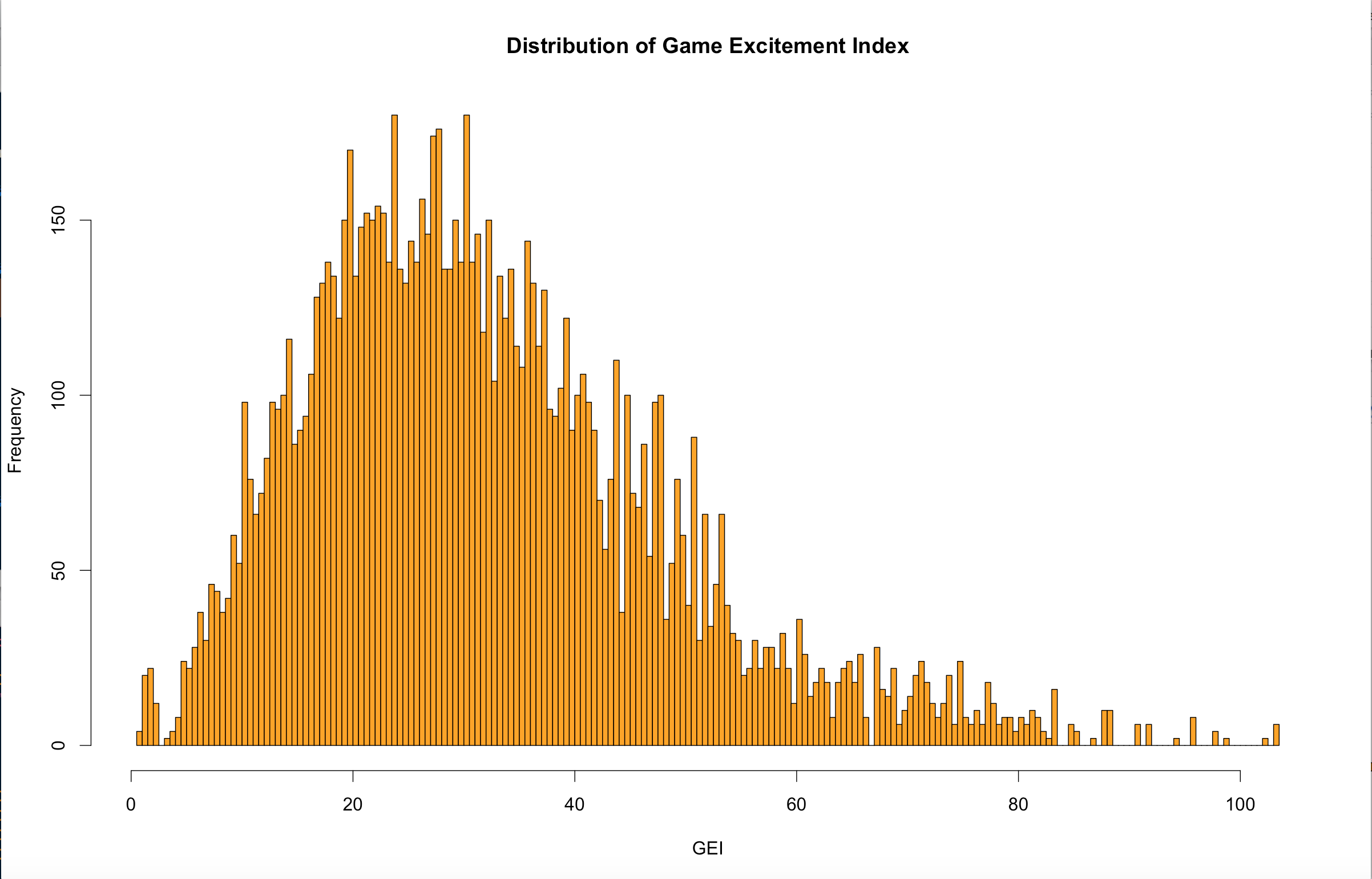 GEI is not a perfect metric by any means. To begin with, it's a predictive metric, attempting to forecast how exciting a game might be; it doesn't make any comment on the quality of a game after it has already been played. Secondly, this metric makes no adjustment for the time of year during which a game is played. If the same two teams met in a conference tournament game, or even an important conference game in mid-February, the game would likely be more exciting than if the same two teams met early in the season. Finally, while GEI makes an attempt to flesh out mid-major games in favor of less exciting games in power conferences, the metric still inherently favors the best teams (who often reside in power conferences). To best make use of GEI, it must be interpreted relatively. If one is a fan of Ivy League games for example, those games are unlikely to register among the most exciting games nationally. However, one could compare the GEI of all Ivy League games in order to choose which Ancient Eight game to tune in to for the most exciting Friday/Saturday night. I plan on releasing regular updates during the 2017-18 season for all Ivy League games, the most exciting mid-major games, and the games that score highest GEI ratings on the national level. Stay tuned for more exciting (literally!) college hoops coverage.