After several deep runs in the NCAA Tournament, the Gonzaga Bulldogs finally made the first Final Four in School history. While fans in Spokane, WA must be over the moon, many fans have criticized Gonzaga’s run, claiming that it has had an easy path to reach the Final Four. When this argument is made, people tend to cite the seeds of the teams which Gonzaga has beaten thus far: 16 (South Dakota St.), 8 (Northwestern), 4 (West Virginia), and 11 (Xavier).

This got me thinking about which past NCAA champions have had the easiest or more difficult paths to the title. For this analysis, I use tournament data since 1985, when the tournament field expanded to 64 teams. I began by calculating the historical frequency with which each seed in the NCAA tournament beat every other seed it played. Using these frequencies, I assigned difficulty ratings to each win a champion made on the its run to glory. The difficulty rating for each game was computed as follows: 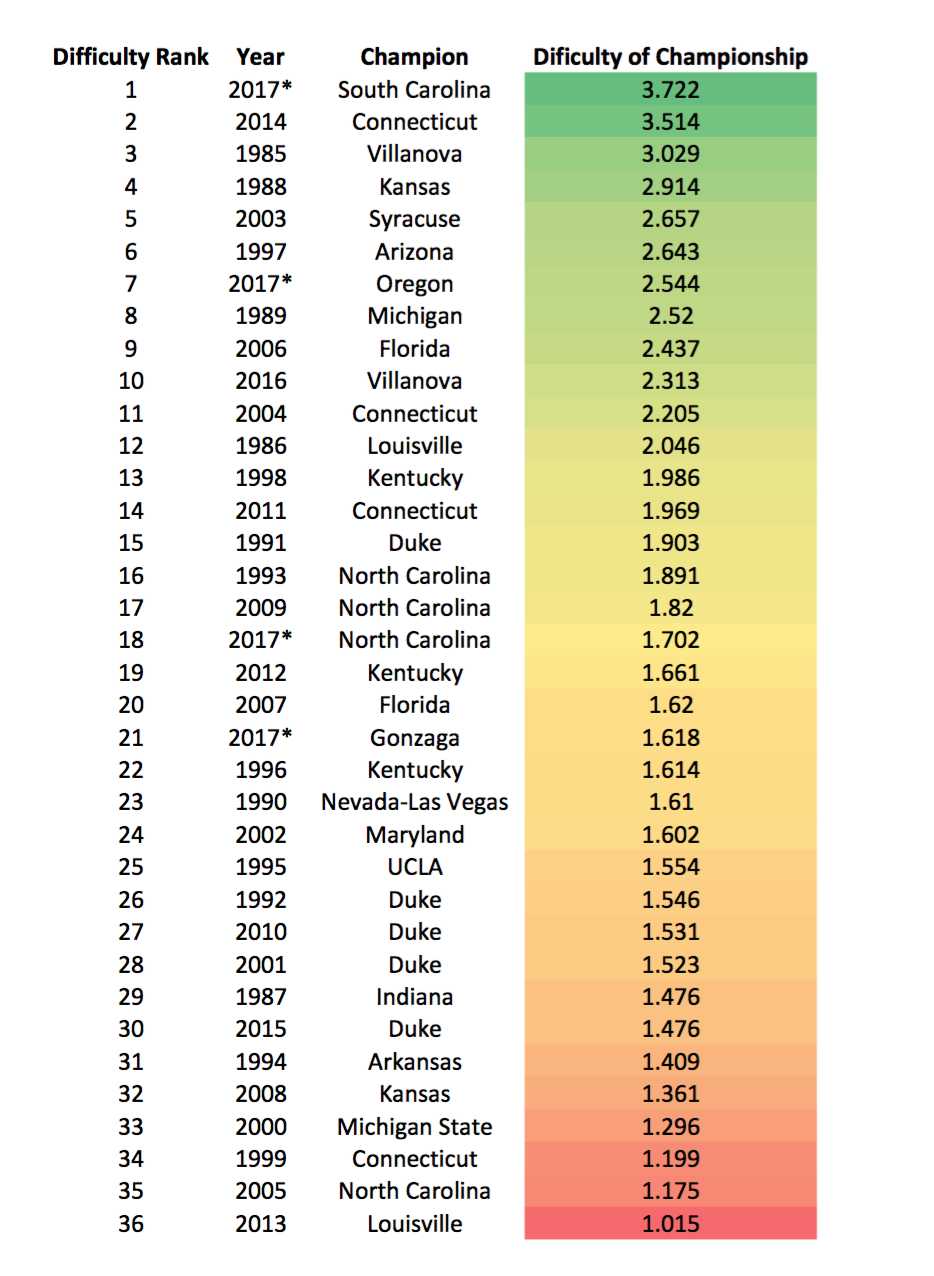 By this method, UConn’s 2014 title run as a 7 seed was the most difficult, followed by 8-seeded Villanova’s championship over Patrick Ewing’s Georgetown squad in 1985. Similarly, Louisville’s 2013 title and North Carolina’s championship in 2005 were among the least difficult.

Finally, I used this method to estimate where each of this year’s Final Four teams’ championship difficulties would rank should they cut down the nets in Phoenix. To do this, I averaged the sums of Game Difficulty Ratings for each possible remaining championship path. If South Carolina comes out on top, its run to the title would surpass the 2014 UConn run as the most difficult. A Gonzaga national championship would be the 21st most difficult title run, harder than that of 15 previous title-winning squads. Many of the championships which a Gonzaga title run would surpass come from blue-bloods of college basketball, like UNC, Kentucky, UCLA, and Duke (four times!!!).

Using seed to estimate championship difficulty has its drawbacks. To begin with, there is a lot of year to year variation for a particular seed, and within any year, all teams of a given seed may not be of equal strength. Moreover, teams can be severely under-/over-seeded. Our model ranked 4 seed West Virginia as the 3rd best team this season, for example, so my estimate for the difficulty of a Gonzaga championship is likely too low. Despite these drawbacks, this method allows for a nice estimate of teams’ various championship difficulties and clearly shows that the hate against Gonzaga, at least from a numerical standpoint, is unjustified.