By: Harrison Tracy and Evan Green

There is no question that home teams in the NFL benefit from home-field advantage. Looking at all regular season games dating back from 2009 to the 2015 Season, only three teams have had a worse winning percentage at home than on the road. During this time frame, home teams won 57% of games. 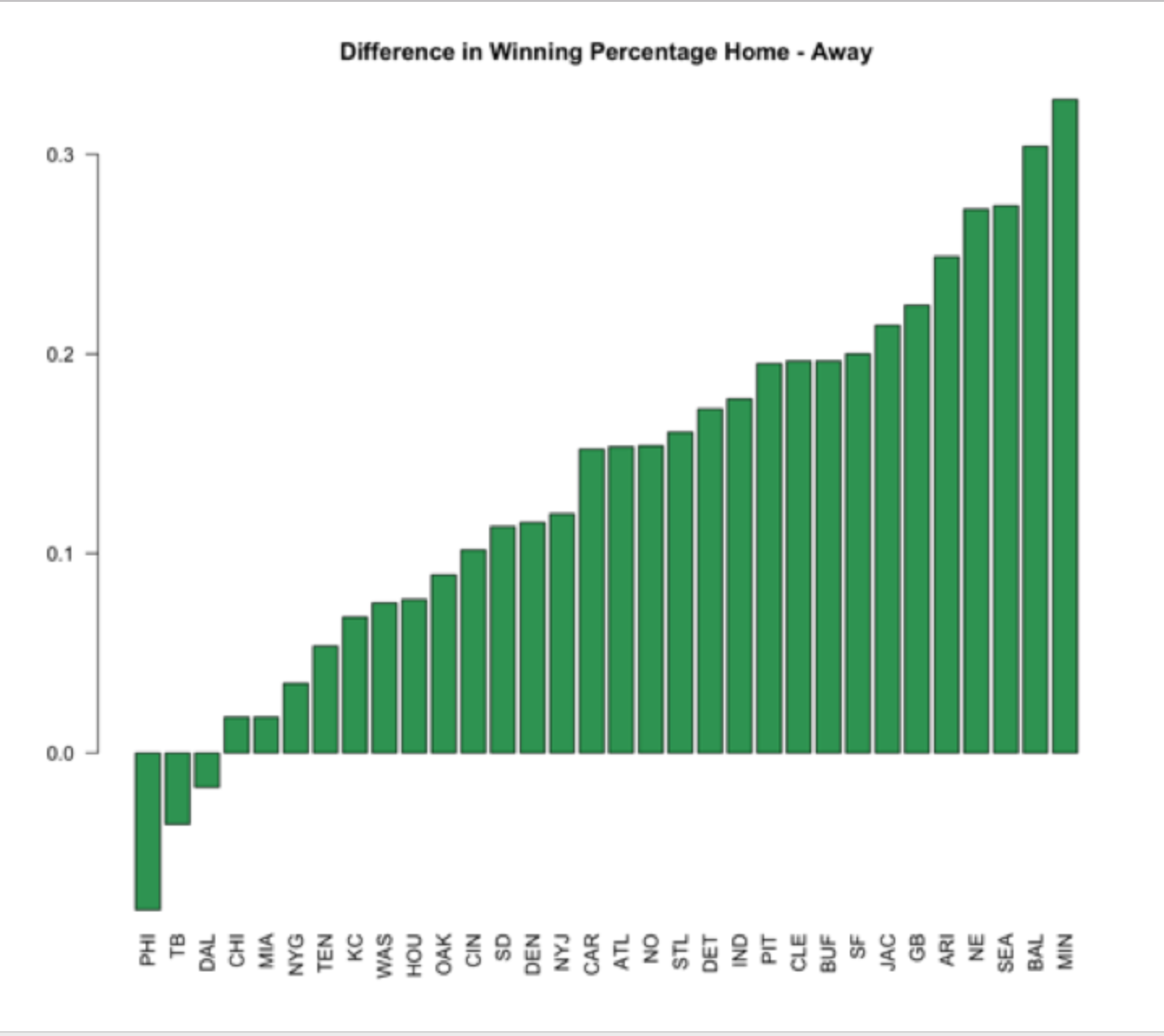 We decided to examine whether the number of timeouts that an away team spends can explain a team’s home field advantage. We choose timeouts as our explainer variable because one important factor important factor of home-field advantage is crowd noise. A loud home crowd can make it difficult for the away team’s players to hear the play call during the huddle and audibles and the snap count at the line of scrimmage. A team might be forced to call a timeout if there is a lot of confusion about the play. Another reason away teams may use more timeouts is that implicit bias by the refs or inferior replay equipment causes more challenges by the away teams. Thus, away teams might run out of timeouts or bet left with fewer timeouts in late-gate game scenarios in which they need to preserve time to sustain game-tying or game-winning drives.

First, we looked at the average number of timeouts away teams have remaining during the first half and sorted the results by the home team. We restricted our analysis to the first half because in the first half teams should be maximizing points while in the second half the impact of the score is much greater. 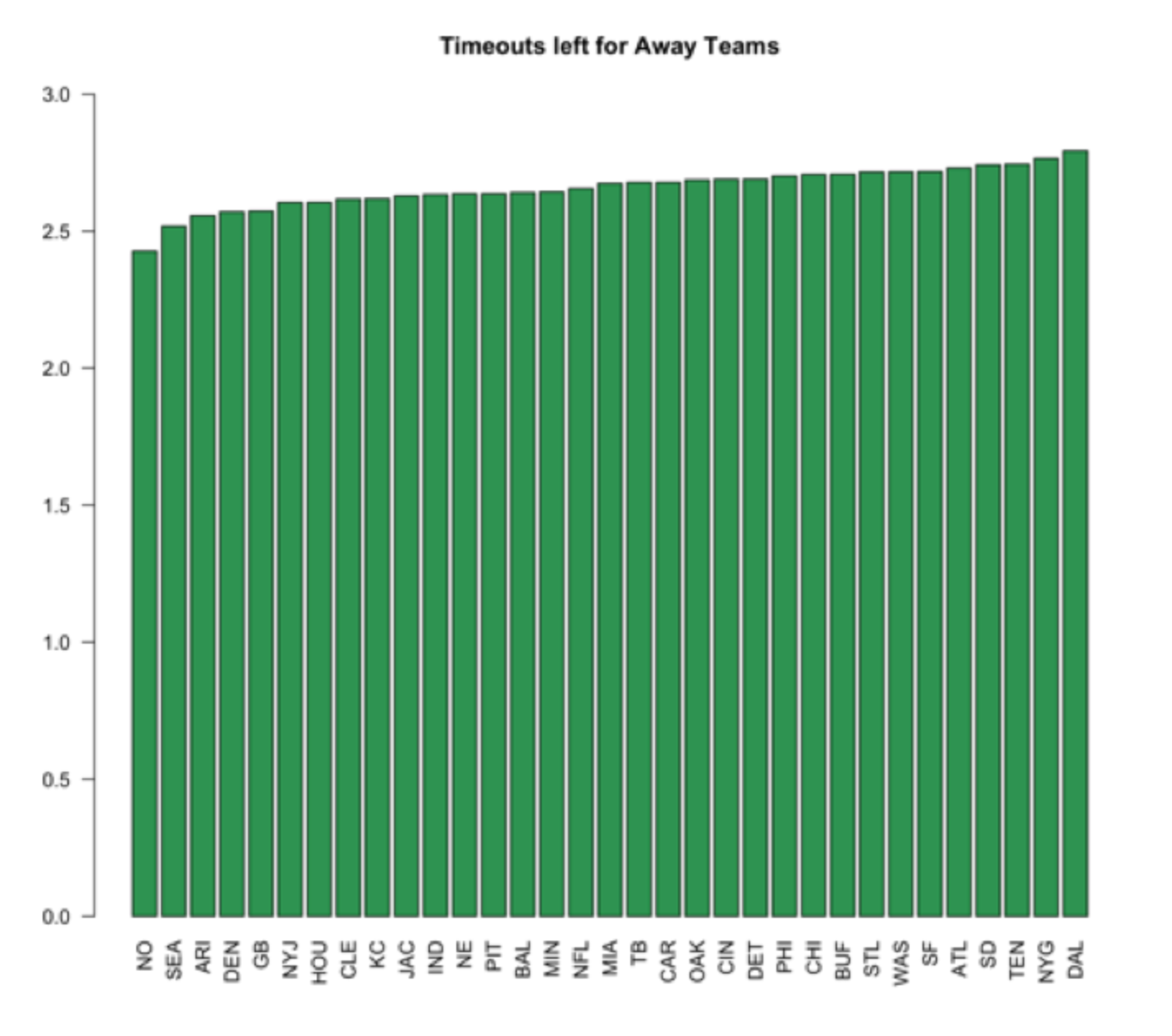 Away teams are left with the fewest timeouts when they play the Saints, Seahawks, Cardinals, Broncos, and Packers. Conventional wisdom about home-field advantage seems to agree with these findings. Of these 5 teams, 4 were cited in recent Fox Sports and NFL.com articles ranking the NFL’s 5 best home-field advantages and all five were cited in a recent Bleacher Report article listing the 8 teams that protect their home turfs best.

As predicted, we found a statically significant negative correlation between the difference in winning percentage at home and on the road and the average number of timeouts away teams have left. 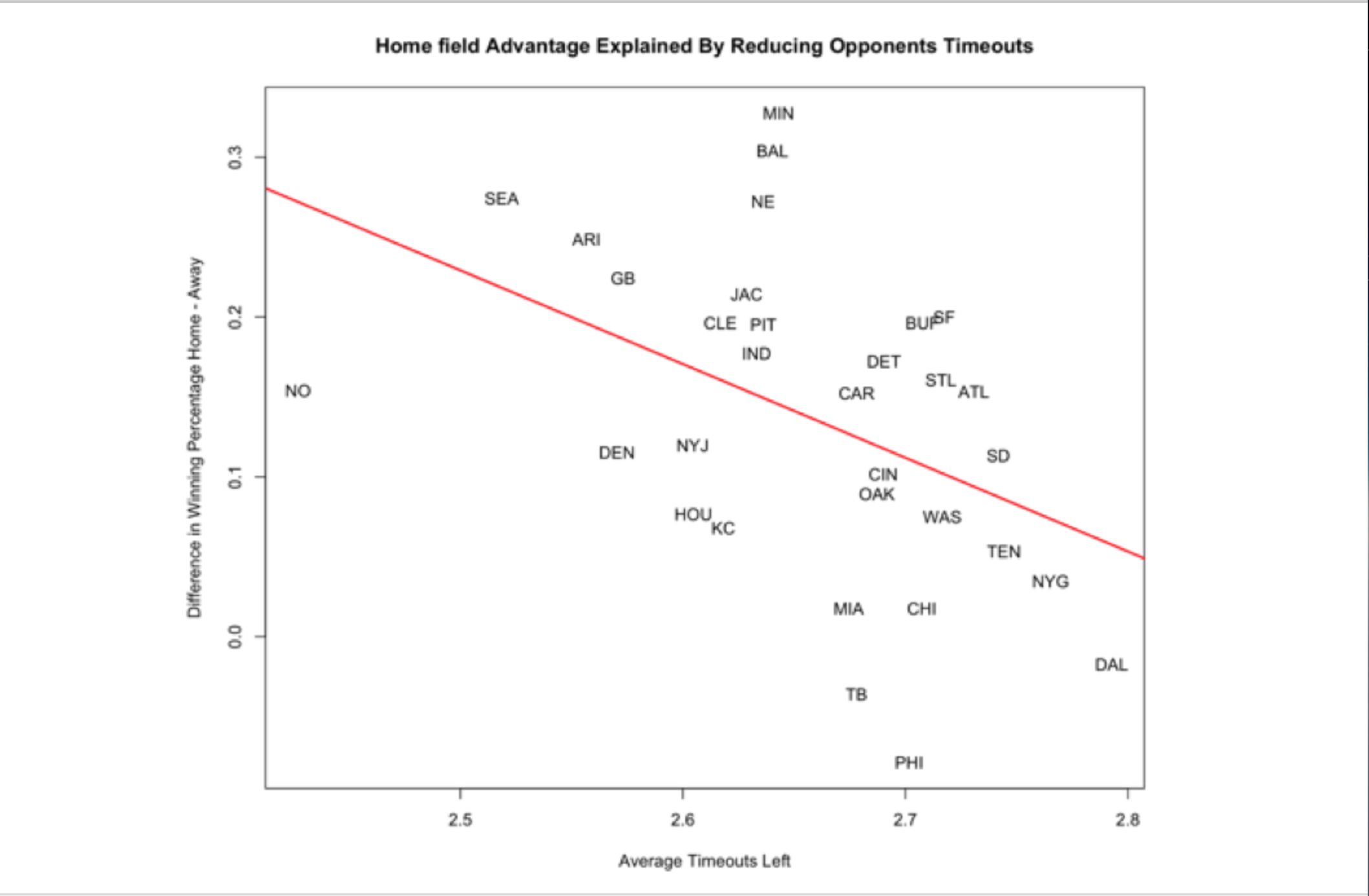 Notably, the Seahawks, Cardinals, and Packers rank in the top 6 for both difference in winning percentage between home and away and number of timeouts left by visiting teams. New Orleans is a significant outlier, winning far fewer games than we expect given their propensity to force teams to take timeouts.

Our findings support the idea that strong home field advantage can force away teams more frequently, which can leave teams with fewer timeouts in crucial late-game scenarios and hinder efforts to tie or win the game. Of course, correlation does not prove causation, and in fact timeouts, especially in the first half, are almost definitely not valuable enough for this effect to causal. However, this analysis exposes a potential explanation for home field advantage and especially why home field advantage is not uniform across different teams. This finding suggests that teams have better home field advantages because their stadiums are louder, which leads to more timeouts being taken. Perhaps the causal mechanism is that louder stadiums cause timeouts to be taken more and create more implicit bias by the refs toward those home teams. Whatever it might be there is something important that is driving the home field advantage and the lack of timeouts for away teams.