By: Evan Green and Daniel Tokarz

Many NFL games are impacted by the usage of timeouts. We see teams lose crucial games because of poor clock management, exemplified by the Chiefs, who have been known to run down the clock rather than use timeouts. Other teams lose games by wasting their timeouts too early, not having any way to stop the clock in the last couple of minutes. By studying the way teams use their timeouts, we can learn more about the ways games are impacted by these decisions and use this knowledge to better understand the factors that go into winning a big game in the National Football League.

As a part of this process, we have made a histogram to show how teams use timeouts throughout games. We have compiled data from the 2009 - 2015 seasons, and charter the absolute time left (in seconds) on the x-axis, with the number of timeouts used during a given time range on the y-axis. We have also separated the graph into home and away teams, to see if teams exemplify different patterns of timeout usage on the road. The vertical red lines signify the ends of quarters and two-minute warnings.

Right off the bat, we notice that teams overwhelmingly use their timeouts at the end of the 2nd/4th quarter. This makes sense, as these are the time sensitive parts of the game. There is relatively even timeout usage for the first 20 minutes of each half. During this low usage time, another interesting observation is that road teams tend to use more timeouts than home teams. To understand this, we can look at why teams use timeouts during this period. It is almost always to avoid a delay of game when the play clock is running down. One of the things that causes this confusion, preventing teams from communicating, is crowd noise. Crowds get loud when their home team is on defense, in the hopes of disrupting the road team’s offense. From examining the timeout usage between home and away teams during the period when timeouts are almost exclusively used to avoid delay of game, we can say that crowds tend to accomplish this goal, at least to the point of forcing road teams to spend their timeouts. This, of course, means that they won’t have timeouts to use later in the half/game, which can prevent them from mounting a potentially game changing drive. Another point of note during this low period is a small yet noticeable spike right before the end of the first quarter. This seems strange, but one possible explanation could be an attempt to get a field goal in before the change in direction to take advantage of the wind, as the change in direction is seemingly the only thing that changes at the end of the 1st quarter. 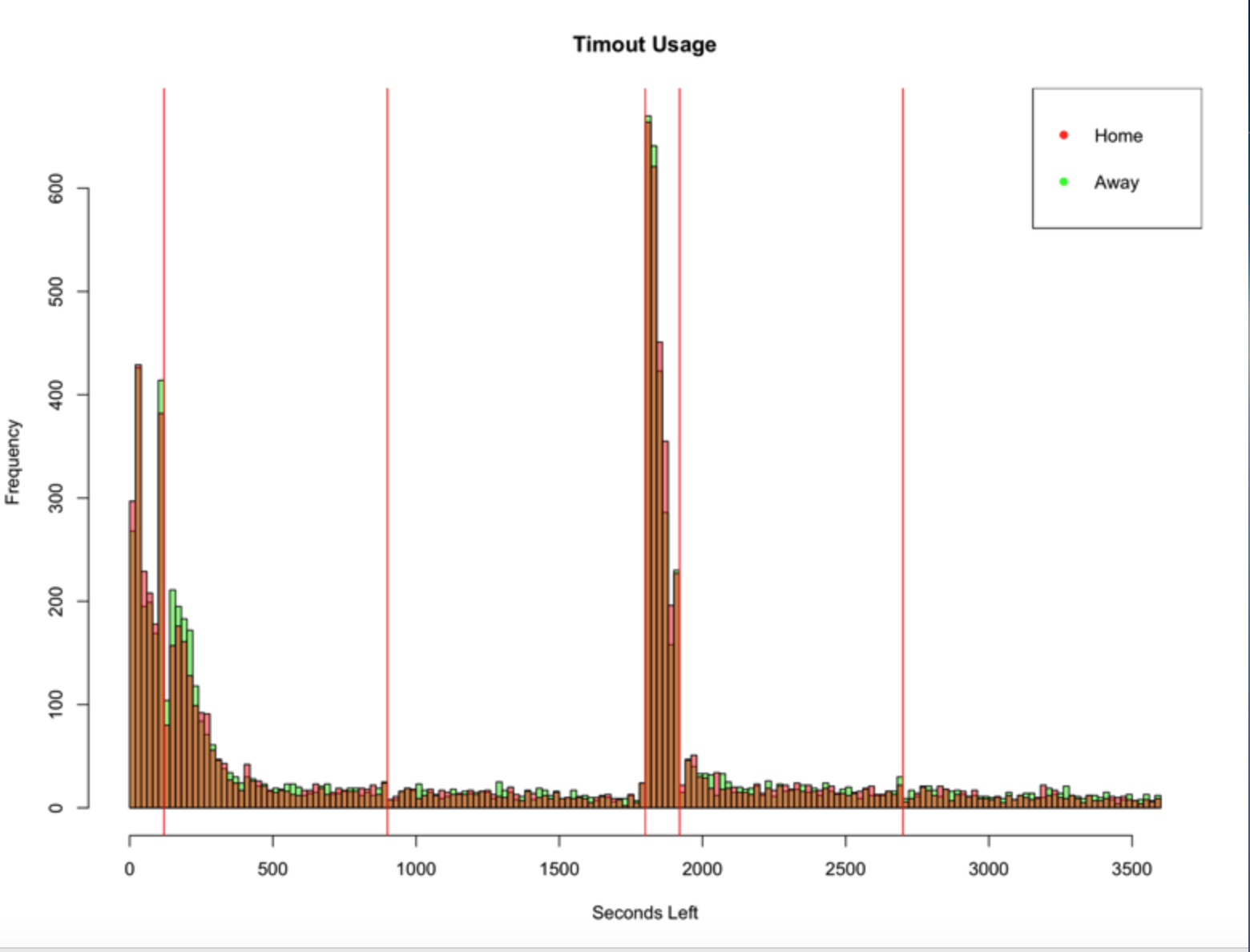 The much more interesting parts of the histogram are during the last 10 minutes of each half. In the first half, the time when the period of high timeout usage begins is later than in the second half, as well as being far more sudden. The number of timeouts used shoots up very high right after the two-minute warning, with only a slight increase in timeouts used in the couple of minutes before this. Teams seem to gain a sense of urgency about the running clock earlier in the second half. When we look at the divisions of home vs away during this period, we see higher usage of timeouts by home teams, with four of the six data points being significantly higher. As we mentioned earlier, it seems that road teams tend to be forced to use their timeouts earlier, which means home teams have more left near the end of the first half, and can thus use more of them during their two-minute drill. This is a big advantage for home teams. Home teams also use more timeouts in the last two minutes of the half. One possible explanation could be that home teams are more comfortable being aggressive at the end of halves while away teams are more content to go into the half with the score what it is.

When we turn to look at timeout usage during the end of the 4th quarter, the most crucial part of the game, we see the period of high timeout usage kicks into high gear with around seven minutes left. Again, this is earlier than in the first half. The reason for this is that teams have a much better sense of the game at this point, and know what must be done to make a difference. If the leading team has the ball with seven minutes to go, it would make sense to use timeouts to prevent them from running out the clock, to get the ball back for the final drive with as much time as possible. In the first half, where teams are more comfortable letting the game take its own form, they will let the clock run more freely for longer. Looking at the divide at the end of the game, the road teams use more timeouts at first, but in the later seconds, specifically in the time following the two-minute warning, the home teams are using more timeouts. When we think about the flow of a game, timeouts prior to the two-minute warning are often used to stop the clock and defense and get the ball back. In the final two minutes, they are used during a final drive, perhaps even to stop the clock to get the field goal team on the field. Because home teams simply win more often than road teams, the situation where their comebacks fall short (and they’ve run out of timeouts in the process) often occurs. From the way home teams use their timeouts, it seems that they can mount a final drive in the last two minutes more often than a road team.

In summary, home field advantage seems to be linked to timeout usage, in that home teams clearly force more timeouts to be used early in halves than road teams. This, of course, means that they won’t have timeouts left during the later parts of the game, the reason why more home teams are using timeouts in the last two minutes. Timeout usage is one of the many aspects that can influence the outcomes of the wonderful game we love.