Editor’s note: Sam is a senior at Tulane Univeristy, and is a guest contributor for YUSAG. He can be found on Twitter @getme_a_samwich and @SamTheHoopsGuy

As a big fan of both College Basketball and the NBA, the NBA draft has always been a bridge of sorts between the two that has intrigued me. However, I’ve always had an issue with the high-variability that mock drafts seem to display. These mock drafts relatively agree at the top of the draft. For instance, one mock may not have Arizona center Deandre Ayton being the #1 overall pick necessarily, but it will no doubt have him in the top 2 or 3, lest the mock would be deemed ludicrous. In this sense, mock drafts do a pretty decent job at forecasting the top picks, they may be off a little but nothing dramatic. The further down one goes in a mock draft, the more one starts to notice variability. One mock may have a player as the 28th pick while another will have the player going undrafted.

This aspect has always frustrated me. I personally had my own suspicions that these decisions on where to mock late first round players and second round players are made either out of personal biases that the writer has or in some otherwise random fashion. I’m not faulting the writers for doing so if that is the case, I just think it may be easier to forecast the top of the draft because that’s where more of the media focus is on. By not focusing on the back half of the draft, it makes sense that there is less public information for writers to utilize on players when making their mock drafts.

This was the prime motivation behind SAMScore. SAMScore is an analytical method I devised in order to forecast the NBA draft. It should be noted that the score SAMScore yields is not necessarily an indicator as to how the player will succeed in the NBA, its’ only intention is to project where in the draft the player will be selected. SAMScore takes into account the following when evalutating a players’ draft stock:

The latter was included because I suspected that players whom were on better teams with harder strengths of schedule would likely be drafted higher as a result of the higher media exposures they had. The factors taken into account are not necessarily the same for each player. They vary based upon the position: for instance, for guards/wing players it was determined that assists were an essential indicator, but this was not the case for centers. So, in total I ran three regressions: one for guards, one for wing players, and one for centers, all of which used player data dating back to the 2011 draft.

Two other things should be noted about the SAMScore rankings before I reveal the NBA Mock draft I have created using SAMScore:

1.     Because SAMScore takes into account college statistics, international players and collegiate players who played fewer than 10 games (Michael Porter Jr.) were deemed ineligible to be scored using SAMScore. To accommodate for this, for international/ineligible players were ranked by simply using their aggregate average from mock draft writers.

2.     SAMScore does not take into account “team needs”, or how a player fits into a particular scheme in this mock draft. It should be again noted that SAMScore does not intend to necessarily predict the mock draft exactly right, but mainly intends to find the draft pick range that a player will most likely be selected in. It is for this reason that I included a “Projected Pick Range” next to each player, so one can see when a player is likely to be selected (this was done using a 95% Confidence Interval).

Without further ado, I present to you the 2018 NBA Mock Draft using SAMScore: 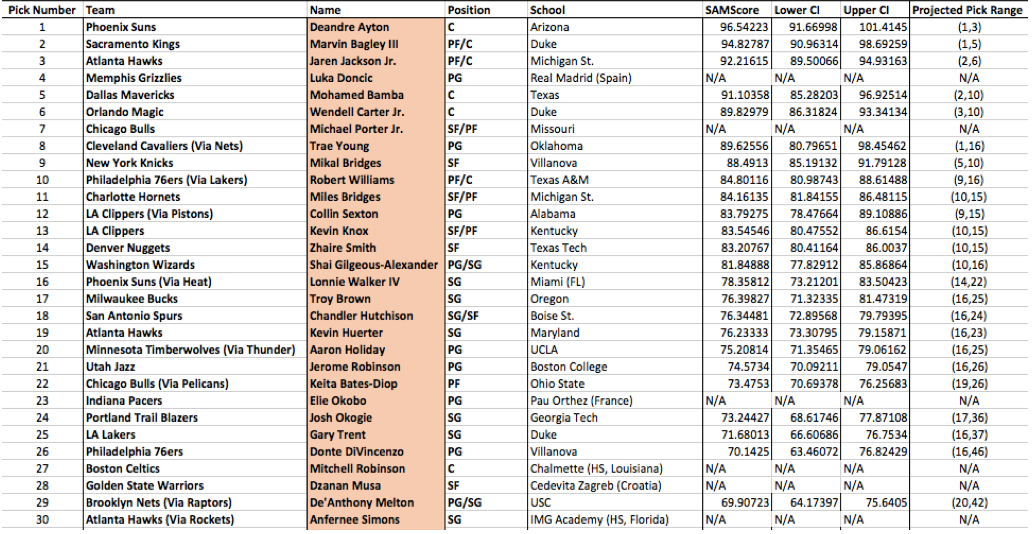 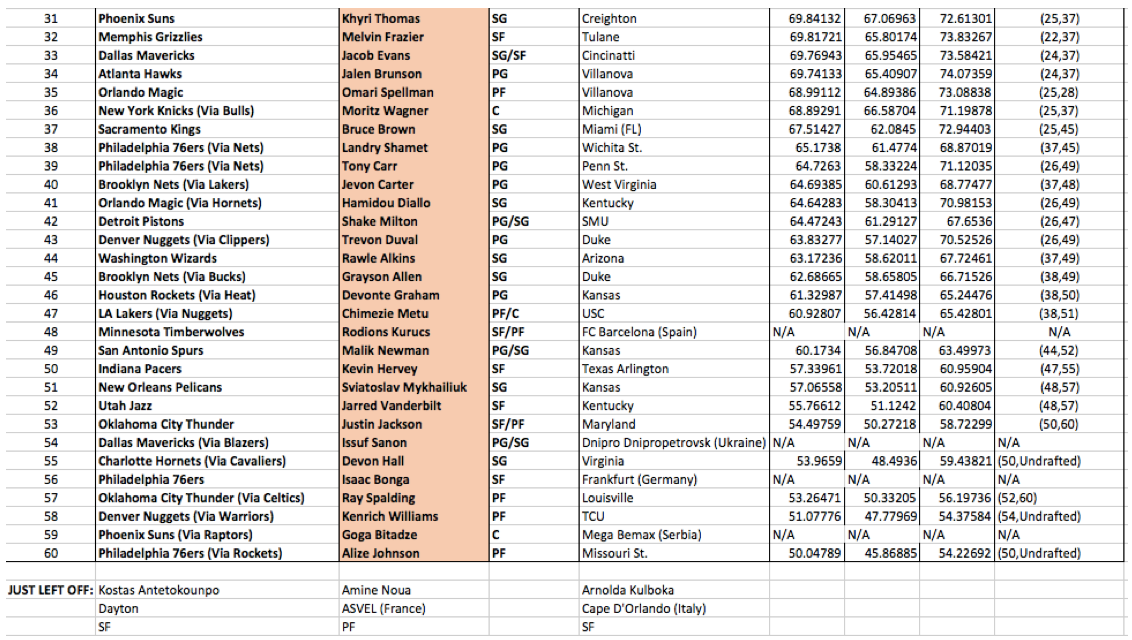